Welcome to the Course About Your Instructor 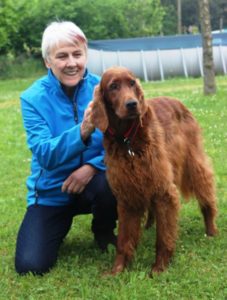 Robyn, Linda’s youngest sister, has been riding horses since before she could walk. She went through Pony Club and showed as a junior competitor in Alberta. She later attended and then instructed at the Pacific Coast School of Horsemanship in California owned by her sister Linda Tellington-Jones. Robyn competed successfully in hunter, jumper, three-day eventing, endurance, western events and more recently with gaited horses, throughout North America and Europe.

In 1982 Robyn became involved full-time with the Tellington TTouch Method. For the past three decades she has been the editor of the TTEAM Newsletter and principle of Tellington TTouch Training Canada. Since 1986 she has been teaching TTouch on a full-time basis in Canada, the US, Europe, South Africa, Asia, and Australia and New Zealand, spending about 160 days a year traveling. Robyn has given demonstrations and lectures at various venues including Spruce Meadows; Equitana USA, Equitana Asia Pacific, and Germany; Western College of Veterinary Medicine at the University of Saskatchewan; International Humane Society Conference in Vienna and Murdoch University in Perth.

Besides teaching around the world and at her farm in Vernon, BC, she and her husband have been importing and breeding Icelandic horses since 1976. In addition to their Icelandic herd which numbers around 50, they also share their farm with a cat, two dogs and a very talented parrot named Frances.

Get in TTouch with Robyn